I registered with WordPress six years ago today, and having just been notified of that I’d like to post something in line with what I created the site for in the first place: context-free musings on unimportant things. I’ve watched a bunch of films recently and here’s what I thought of ’em.

I’ve been in the mood for comedies from the 1990s lately. I think it’s a physical reaction to me becoming aware of how cynical, spiteful and self-conscious modern comedy films are. I’ve really felt like I just wanted to watch something that didn’t hate everything, wasn’t half-baked on the assurance that people eat improv raw (we like GOOD improv, Hollywood) and didn’t feel like it needed to tick any number of boxes that wouldn’t be missed if left unchecked.

Wayne’s World fell into this category. I’ve never been a huge fan of this movie but I like films about nice people, and Wayne and Garth are nice people. Watching it back, it’s got nice going for it, but that’s about it. It’s not very funny, and for a film about a pair of metalheads has a serious dearth of metal on the soundtrack. Still, there’s something about films populated by aimless characters that still appeals to me and though I didn’t laugh much (or maybe even at all), I enjoyed watching it enough to give its sequel a go. Oh, and to upload my favourite line to Youtube:

Wayne’s World 2 is such a good example of ‘more of the same’. Same jokes, same plot, everything you liked from the first film is there bar Michael DeLuise who was presumably off filming Encino Man. Chris Farley’s back with more to do but less laughs. Rob Lowe is now played by Christopher Walken (as Cristopher Walken), sleepwalken (if I may) his way through another uninspired performance as himself. Tia Carrere has a new haircut, but it’s a less good haircut. Also there’s jokes about Chinese films, pubes, Woodstock, um, Aerosmith. Still not funny, but a pleasant hangout I guess.

Nostalgia often leads me back to Kevin Smith movies. I hate Kevin Smith’s work, so the only reason I can fathom that I’m able to sit through one of his films every couple years is that I’m trying to subconsciously reconcile with my younger self while being unable to consciously resist actively critiquing these films as they play live to my brain. Mallrats is a dreadful, dreadful film, and should have given Smith away as the chancer that happened to stumble across JUST enough Gen-X goodwill to make a cult darling of Clerks, but somehow he sunk to lower lows with Chasing Amy and has continued to fester as a filmmaker ever since. I’m almost resentful of myself sitting here, presently unemployed and sipping Cherry Coke and gladly bashing a successful artist’s body of work because it makes me feel like the very armchair warriors I resolutely refuse to identify with (and you can take a look around this site – that ain’t me). But I just can’t get over how bad Kevin Smith is as a writer and director and how far he’s managed to get without being properly caught out. Mallrats is occasionally laughably misjudged in its efforts to appeal earnestly to its audience’s heartstrings while making jokes about anal sex and comic books. It is a bad, bad film. Saving graces – Jason Lee, as in Chasing Amy, is able to engender some good faith by the time things are done with, and his My Name is Earl buddy Ethan Suplee is excellent as poor Willam, unable to see that sailboat.

Rumble In The Bronx 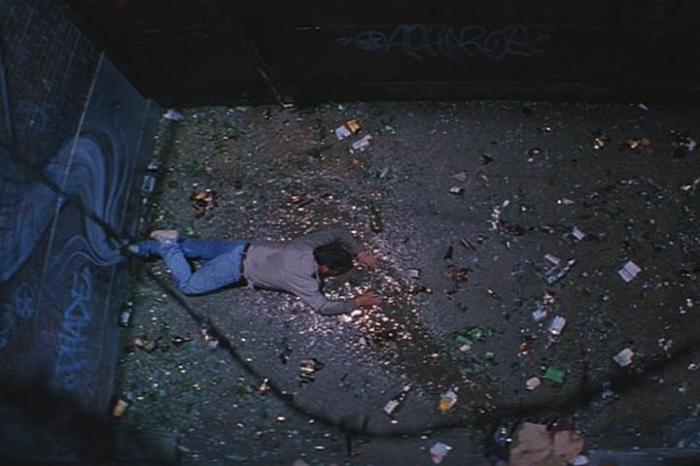 Rumble In The Bronx is baffling. I’m going to have to watch some more Jackie Chan films to see if this film’s formula exists in other pictures. Consider the whole cast being dubbed despite that they are clearly speaking different languages during filming, or the juxtaposition of big, childish comedy (like a guy getting smacked on the forehead and running around going “aiaiaiaieieieieieie ohnononononooooooo”, for example) and real grownup threat like chaps being fed to woodchippers and that brutal alley beatdown with the wine bottles.

It’s such an odd, massively entertaining film. Is it for kids? Yeah. But it’s far too violent for them to watch.

Went into this one expecting a good performance in a bad film, and instead got two good performances in a bad film. Legend is everything you’d expect from a film about gaayyyngstas, but Tom Hardys are amazing in it. Tom Hardy fans oughtta check it out. Same with Bronson. Not a good film, but he’s an actor that demands being watched. Might I also recommend Locke? I think it’s on Netflix, give that a go. 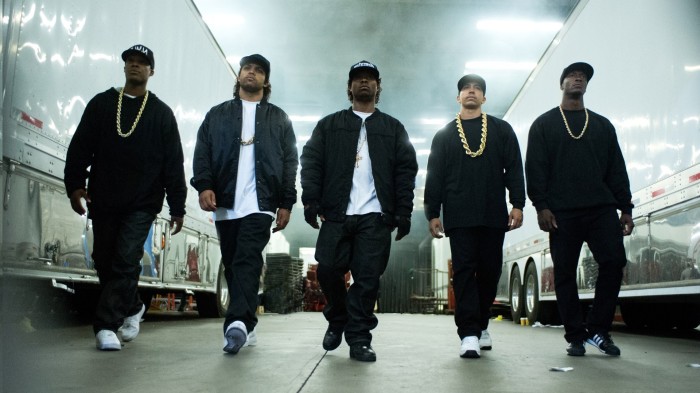 Silly big-screen dramatization of an oversimplified version of how NWA got together, got big and promptly split up. I chuckled at the scene in which they got hassled by the cops and IMMEDIATELY after wrote and recorded “Fuck Tha Police”, or how they all gathered round together with their manager and girlfriends to listen to Cube’s “No Vaseline”. This film presents the version of the NWA you want to exist but know cannot. The group is presented as diehard thug royalty from the getgo. No compromise. No bullshit. Naturally, this allows for no mention of the many glamorous music videos they appeared in, or the radio-friendly alternate-lyrics versions of their most controversial songs. Promiscuity, violence and general badness are duly championed without proper acknowledgment of comeuppance, and it’s far too anecdotal, even at 150 minutes, to feel authoritative. A big load of shit, really. Good tunes though.