Lying in bed and I remember something.

I forgot that I promised (literally one person, and in a fucking text message, not on their deathbed or in a chapel or anything) that I’d write a little bit about the tradition of Music Consolidation Day and how I’ve recently invoked the ceremonial rights in order to proceed with getting all three of my primary listening devices (or five, if you count my ears HAHAHAHAHAHAHAHAHAHAHAHA) synced up with each other. Folks, this is the post for which my Obsessive Compulsive Behaviour category was named.

END_OF_DOCUMENT_TOKEN_TO_BE_REPLACED

No joke, I dreamt last night about writing this post and titling it ‘consolidate me’ (to the tune of Rush’s “Animate”, so that’s what’s happened. Story goes, I’m always annoyed about the glut, the deluge (couldn’t decide which I liked more) of songs and even entire albums on my iTunes and PS3 that I never listened to, never INTENDED to listen to or even actively disliked. It shouldn’t bother me: Dominic has countless duplicates on his computer, not to mention gigabytes of music that friends have put on his hard drive that he too never listens to, nor intends to. Some day I’ll get a wee fiddle at his iTunes as well, but that’s a big task, and I’m only just finished with my own.

This is not the first time I’ve done this, but it’s a little closer to being the last. IN 2008 or so my computer was riddled with multiple copies of many songs and it took some doing to get that sorted. I had a similar situation this time with original files being located in altogether different sections of my hard drive which wouldn’t copy directly into the supposedly self-organising iTunes Music folder, but that was the last of my worries: first I had to polish things up.

I began by checking which songs were lacking an entry in any of the following: Year, title, artist, album and genre. To be honest, there weren’t a lot, but enough to merit doing it, plus it was extremely easy to do. Secondly I changed the years for albums that were either notably remixed in a certain year (so Pearl Jam’s Ten and Nine Inch Nails’ Pretty Hate Machine remixes moved from 2009/2010 to their original years) and for live albums I changed it to the year of recording from the year of release (so Sepultura’s Under A Pale Grey Sky moved from 2003 to 1997). This is something I wanted to do for a long time, particularly as I have a ludicrous memory for figures and on PS3 the easiest way to arrange music is by year. It seems more logical to me to have a live document from 1981 sit alongside the album it was released in promotion of in that same year.

With that petty ordeal out of the way, I turned my attention to The Cull. I’ve had a pop at pruning my iTunes folder before but never in such a brutal, merciless manner before. One thing worth mentioning is that pressing the delete button over a selected song only deletes the song from iTunes, but the little fucker remains hidden in your HDD somewhere, whereas entering the options menu that pops up on a right-click and deleting from there will allow you to wipe it from your computer altogether. This is something I didn’t realise before and it’ll be relevant again later.

I had a few protected albums, exempt from The Cull’s relentless gaze, namely those most recent fancies that I’ve yet to fully explore: albums produced or engineered by Scott Burns and by Ministry were spared the rod so to speak. Everything after that was fair game. It’s a sad reality when your getting into a band that you don’t like everything of theirs, but enough time has passed that my brain finally allowed me to do away with a great deal of music by bands that I would still claim to like. For example, from Napalm Death’s last four albums, only a handful of tracks remain, about 6 from their latest and 2 from a 2005 release. Liking Napalm Death does NOT mean I need to have their entire catalogue represented in my music collection. It’s rewarding to finally realise this, let alone apply it to SO many other bands. Between Rush’s 1982 album Signals and their 2002 ‘comeback’ Vapor Trails, I have barely one album’s worth of songs culled from 7 full-length releases. The realisation came easily that the time I kept telling myself I’d devote to getting familiar with these albums was never coming, so away they went.

Part of the idea behind this was that if I put the whole thing on shuffle, no song would come on that I’d want to skip, and though I’m not quite there yet I am SO much closer to it than I was before I started. My library (if you will) is so much leaner a beast now.

But wait: there’s more. Because my PS3 is my primary (almost only) method of listening to music and organisation by year is for me the most efficient method of doing so, certain methods had to be applied to maximise said efficiency. I have an awful lot of game and film music on there (though a LOT of the film music didn’t pass The Cull) and such albums tend to comprise a huge amount of tracks which can be a pain when cycling through to find a song you like, particularly in the case of 1996 (my favourite year for music) which in Soul Blade and Tekken 2 alone boasts something like 150 tracks. I have, however, found a way to counteract this. Originally I subtracted a thousand years from each album’s release date, so 2006 became 1006 and so on, which in iTunes works fantastically, but the problem is that the PS3 doesn’t recognise any year less than 1000 and as most of my music if from before then (film scores just ain’t what they used to be) I had to reassess. What I’ve ended up doing is reducing every year by a seemingly awkward 900, so 1999 is now 1099 and 2001 is 1101. With at least the last two years matching their actual counterpart in makes browsing for ‘actual’ music a lot quicker, and all the score music (and comedy, come to think of it) is in one handy place. Simpler than it sounds, though I will admit I was the least harsh on the game scores section and a further Culling is in store, so smoke ’em if ya got ’em, Biohazard 2 Complete Track (ludicrous Japanese title).

Following the deciding of which tracks I wanted rid of I needed to ensure they were all in the one place, so I ended up creating a new folder (titled ‘noofe’, as is now tradition on my trusty little Acer laptop) on my desktop and copying the 7000+ tracks directly into it from the iTunes browser rather than a specific folder, ensuring that whatever was on the screen at that point would be preserved. Once that was done the count showed a missing 60 tracks but so far I’ve yet to notice any major losses (sorry, I should say ANY losses) and if I do I can easily rectify it. With the new iTunes folder created I deleted the old one and reinserted the songs back into iTunes, creating automatically a new self-regulating iTunes Music folder and THEN deleting the one I had created earlier. Confused? Thank your lucky stars if you are: no-one should be burdened with this much thought over an efficient music library.

Once that was done I had to delete the music from my PS3 to make room for the new and improved (a favourite oxymoron) library. Sadly, the PS3 doesn’t allow for a quick ‘delete all’, so I had to do it by genre, one at a time, though it didn’t take long enough to moan about it. Then copied the iTunes folder onto my iPod, then onto the PS3, the latter stage of which took a good seven hours.

I then had to ensure everything on the PS3 was in top order, seeing as it’s where I’d be using the music 99% of the time. What I was looking for were 1) songs I didn’t want that had escaped The Cull (and I caught about 20 or so), 2) songs marked as ‘corrupted data’ or ‘unrecognized content’ that would no longer play on the PS3 but work fine in iTunes and require re-downloading (including “Broken Wings” by Mr. Mister and parts of the Dawn Of The Dead score taken from the DeWolfe Music Library) and 3) songs without artwork (numbering about 20 albums). All issues have since been rectified and the PS3 music library is just about as perfect as can be.

All in all, I lost about 20GB of music which is close to a third of what I had before I started, and I can honestly claim that 99% of it is music I either love or intend to listen to in the next two months. If I DON’T listen to it within two months, it gets binned. Chances are the thing’ll actually get smaller as time goes on.

Thanks for sticking with me, I bet it wasn’t easy.

BUT YOU’VE NO EXCUSE FOR COMPLACENCY: CONSOLIDATE!!!

I always find satisfaction seeing some obscure item I’ve owned in real life in a TV show, and I’m talking truly obscure here, instances with thousands of possible variants out there. What follows is a brief collection of the same.

First up, this clock from ITV’s The Fattest Man In Britain:

And again, the same clock, from a great many years ago, found in my wife’s dad’s attic: 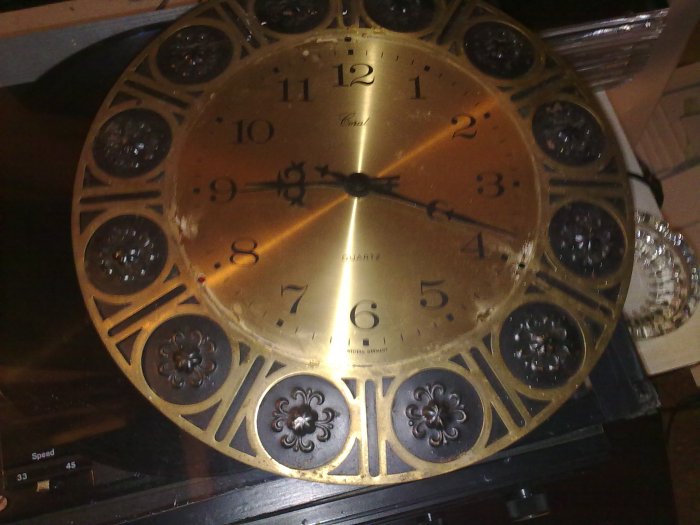 Below, the incomparable Matt Berry on his exercise bike in the third series of The IT Crowd.

Not two hours before I watched this episode for the very first time, I bought the very same bike in Argos. I could have taken a better picture to show the distinctive handles and speedometer, but its clear from the pictures that its the same one. What are the chances?

Up next, the piece de resistance: the cookery book featured in Alan Partridge in 1997 that was printed in 1978, that also lives in the second-to-bottom drawer in my ma’s kitchen. Come one, HOW many cookery books could there have been to choose from? Even the year the show was made would have seen hundreds released, let alone 19 years beforehand. Ace. The marvel of co-incidence. Or, separate… co-ownership? 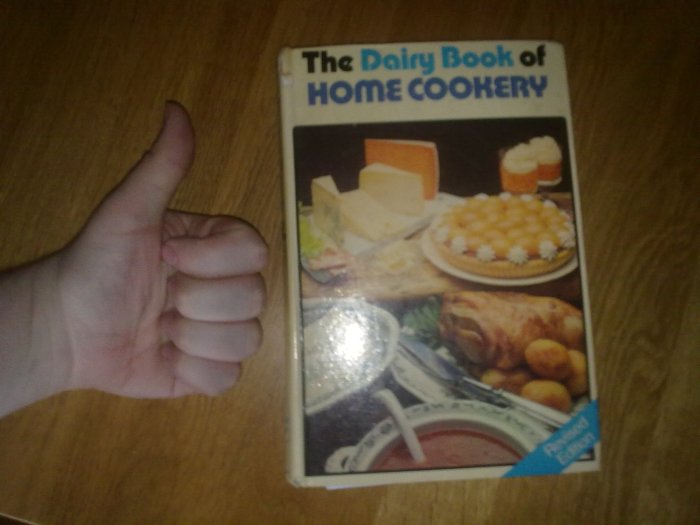 And below, a beard wearing it: 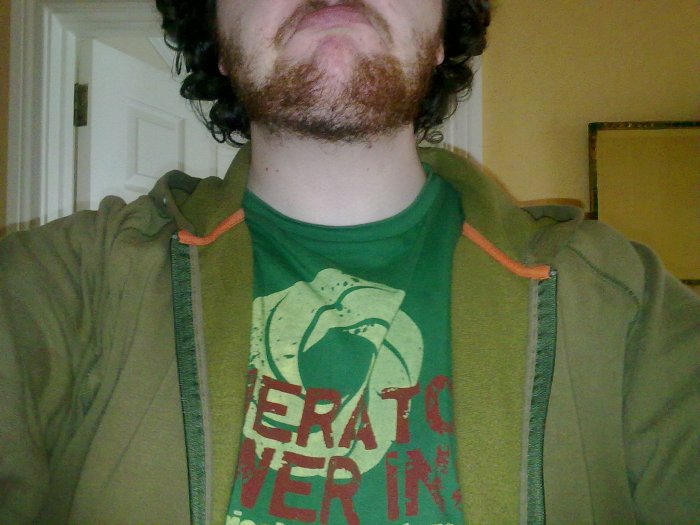 I’ve also spotted my old bed in an episode of Friends, my (now-dead) Ikea bookcase in some Charlie Brooker show and my last TV in an episode of Dollhouse, but you get the idea. I command it.